On this page
Edit this page Report a mistake

This guide provides complete information about the Unlaunch Node.js SDK and how to integrate it in your applications to call feature flags.

The Unlaunch Node.js SDK provides a Javascript API to use Unlaunch. You can evaluate feature flags, access configuration, and more by using this SDK.

The first step is to install the Unlaunch SDK. Using NPM:

Second step is to require the Unlaunch Node SDK.

So to initialize the client, you’ll need an SDK key. SDK Keys are available on the Settings page under Projects tab. Once you have it ready, you can initialize a new client.

For performance reasons, we strongly recommend initializing the Unlaunch client as a SINGLETON and reusing it throughout your application.

Why should an Unlaunch Client be a Singleton?

When you build an Unlaunch client, it starts a background task to download data and store it in an in-memory cache. This process might take some time depending on the size of the data that needs to be transferred. It is extremely poor practice to initialize a new client for each client request. It will add latency to the request and all downloaded data will be discarded once the request is complete. You may also get rate-limited and throttled by our intrusion detection systems.

It is important that you create an Unlaunchclient as a singleton and re-use it throughout your application. If you create more than one instance, we’ll print warnings in the logs.

After the initialization is complete, you are ready to start evaluating feature flags using the [variation] method. This method will return a variation that you have defined in the Unlaunch Console. You can check using a simple if-else block to execute code depending on the variation that’s returned.

The variation method requires that you pass in the flag keyand the user id of the user that you are evaluating the feature flag for. If the flag is an Operations flag such as a global kill switch and doesn’t require users, you can define a String constant, e.g. userId=System and pass it instead.

The Unlaunch Javascript SDK provides a few different ways to evaluate feature flags and to get variations.

This method evaluates and returns the variation (variation key) for this feature flag that you have defined in the Unlaunch Console.

This method returns one of the variations according to targeting or rollout rules that you may have defined. It will never throw an exception nor will it ever return null. Instead, it will return control if there are any errors such as:

This method is to be used when feature flag targeting rules don’t depend on user attributes such as userRegistrationDate etc. Use the overloaded method below for passing in attributes.

The variation method will never throw an exception.

An overloaded method that requires that you pass in user attributes that can be used to evaluate targeting rules. For example, suppose you have defined targeting rules for a feature flag as such:

When evaluating this flag, you must pass in country and subscriber attributes. If the user is from the USA and is a subscriber, the “on” variation will be returned. Otherwise, “off”. For example,

The attributes and associated operators are used in targeting rules. These attributes can be passed to the SDK so it can use them when evaluating rules.

This behaves just like the variation method but instead of returning a variation, it returns a Feature Object instead. Use this method when you want to get more than just the variation. This is mostly used for fetching dynamic configuration associated with the feature flag. 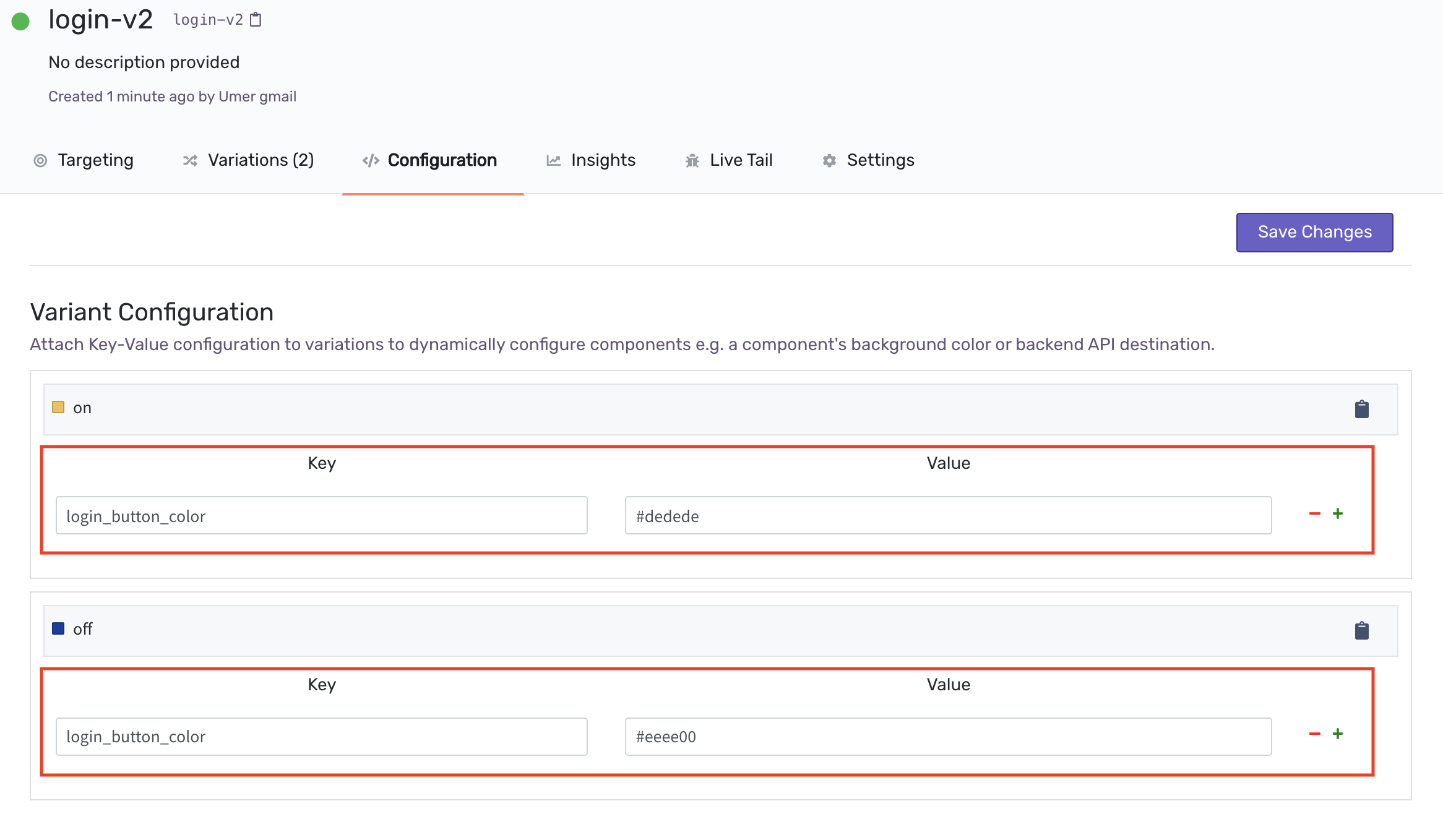 When you evaluate a feature flag, the SDK applies various rules to determine which variation should be returned. If you want to know why a certain variation was returned for debugging purposes, you can use the evaluationReason property of the Feature Object .

Just like the method above but uses attributes that are passed in to evaluate targeting rules.

After you initialize new client, it will download all flags and this process will take some time depending on data. Once it’s complete downloading flags, it will emit ready event. Only after that evaluation of flag would be possible.

Call ulClient.shutdown() method in the end as this method gracefully shutdown the process by closing opened connections, clearing cache and flushing remaining unpublished impression. Once client is destroyed any invocation to variation method will result in returning control.

When initializing the client, you can pass several configuration options as an object as per your requirement.

The Unlaunch Java SDK periodically downloads flags and other data from the servers and stores it in-memory so feature flags can be evaluated with no added latency. The pollingInterval controls how often the SDK download flags from the servers if the data has changed. The default value is 60 seconds for production environments and 15 seconds for non-production. For example, to change the polling interval to 5 minutes:

The SDK periodically sends events like metrics and diagnostics data to our servers. This controls how frequently this data will be sent. When you shutdown a client using the client.destroy(), all pending metrics are automatically sent to the server. The default value is 30 seconds for production and 15 seconds for non-production environments. For example, to change the event flush time to 10 minutes:

This controls how frequently tracking events are sent to the server. The default value is 60 seconds for production and 15 seconds for non-production environments.

This controls the maximum number of events to keep in memory. Events are sent to the server when either the queue size OR events flush interval is reached, whichever comes first. The default value is 500.

When enabled, this starts the SDK in offline mode where no flags are downloaded from the server, nor anything is sent. All calls will return the variation defined against each flag.

Unlaunch Java SDK (all server-side SDKs) connect to Unlaunch servers upon initialization to download all feature flags, variations and dynamic configurations, and store these in an in-memory data store. All subsequent flag evaluations are done using the in-memory data store and results are available instantly.

Unlaunch Java SDK periodically sends events to Unlaunch servers. These events are used for showing metrics and to generate data for the Insights Graph.

In this mode, the SDK neither polls nor updates Unlaunch servers. Instead, it uses JSON file to determine which variation to show to the logged in user for each of the features. You can specify feature flags and variations in a JSON file in your machine and pass its path in configuration against OfflineModeFilePath.

At Unlaunch, we are obsessed about making it easier for developers all over the world to release features safely and with confidence. If you have any questions or something isn’t working as expected, please email [email protected].